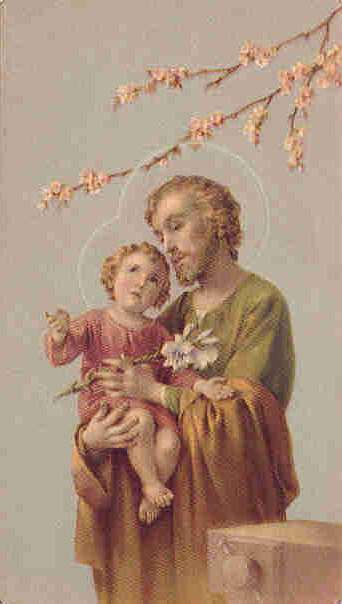 "Now His parents went to Jerusalem every year at the Feast of the Passover. And when He was twelve years old, they went up to Jerusalem according to the custom of the feast. And after they have fulfilled the days, when they were returning, the boy Jesus remained in Jerusalem, and His parents did not know it. But thinking that He was in the caravan, they had come a day's journey before it occurred to them to look for Him among their relatives and acquaintances. And not finding Him, they returned to Jerusalem in search of Him.

And it came to pass after three days, that they found Him in the temple, sitting in the midst of the teachers, listening to them and asking questions. And all who were listening to Him were amazed at His understanding and His answers." (Lk. 2: 40-47)

We can easily understand Mary's and Joseph's sorrow upon realizing that Jesus had disappeared. They were filled with apprehension as they searched up and down for their Son. Those three sorrowful days were a premonition of the time that would intervene between Calvary and the Resurrection. Suddenly, they hear His dear voice. There He is! They are greatly comforted, and their pent-up emotions overflow with a great joy.

In this scene, St. Luke a number of times uses the word "parents" to designate the Virgin Mary and St. Joseph. But this word has its deepest meaning when Mary tells her Son: "Behold, in sorrow your father and I have been seeking for you." (Lk. 2:48)

"Father". That was the word St. Joseph would want to hear most. How he would smile and gaze fondly at Jesus when He called him "Father". As Monsignor Escriva de Balaguer writes: "Joseph loved Jesus as a father loves his son and showed his love by giving the best he had. Joseph, caring for the child as he had been commanded, made Jesus a craftsman, transmitting his own professional skill to Him. So the neighbors of Nazareth will call Jesus both 'faber' and 'fabri filius', the craftsman and the son of the craftsman.

Jesus worked in Joseph's workshop and by Joseph's side. What must Joseph have been, how grace must have worked through him, that he should be able to fulfill this task of the human upbringing of the Son of God!

For Jesus must have resembled Joseph: in His way of working, in the features of His character, in His way of speaking. Jesus' realism, His eye for detail, the way He sat at the table and broke bread, His preference for using everyday situations to give doctrine - all this reflects His childhood and the influence of Joseph." (Christ is Passing By, No. 55)

Afterwards, the Gospel says that Jesus "went down with them and came to Nazareth and was subject to them; and His mother kept all these things carefully in her heart." (Lk. 2: 50)

Pattern of all holiness, glorious St. Joseph, when you lost the Child Jesus through no fault of your own, with great sorrow you sought Him for three days, until you rejoiced exceedingly in finding Him in the temple amid the doctors.

By this sorrow and this joy, we ask you most earnestly to prevent us from ever losing Jesus by mortal sin; but if through supreme misfortune we would lose Him, grant that we may seek Him with untiring sorrow, until we find Him again, and can live in friendship with Him. May we pass onward to enjoy His presence in heaven, and there with you, to sing forever His divine mercies.